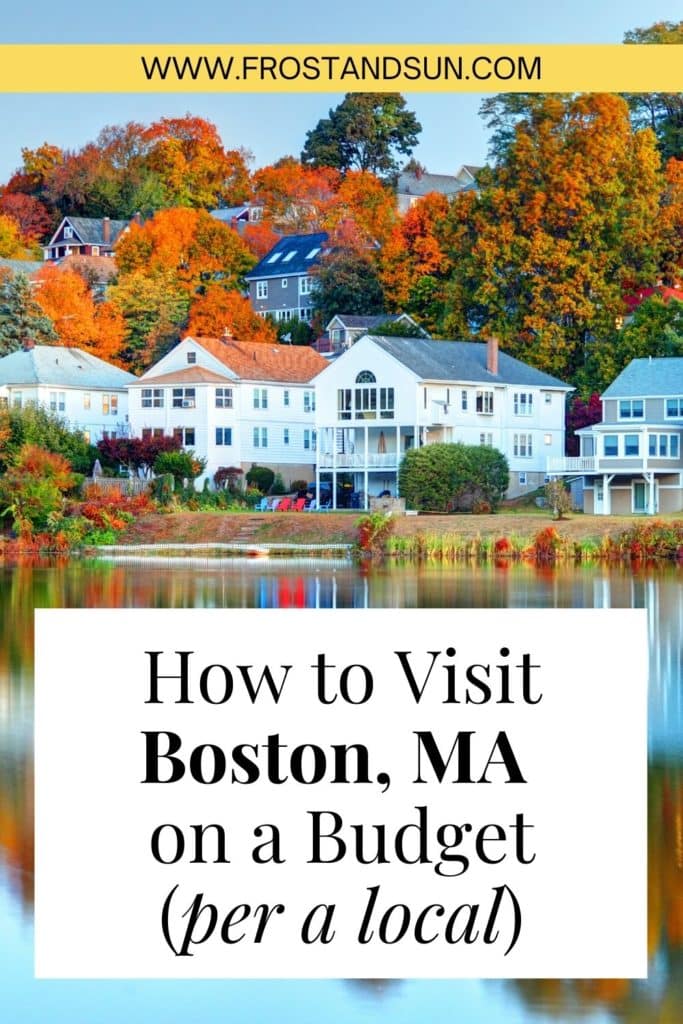 Boston is one of the most expensive cities in the United States, but it’s not impossible to see on a budget.

As a long time Boston resident (going on 16 years!), I know tons of tips and tricks on how to see Boston on a budget.

Best time to visit Boston on a budget

While my favorite season in Boston is Fall due to the mild weather and foliage, there are more deals available during the Winter months.

This is especially true for hotels. The crowds in Boston are lower in the Winter, as well.

The plus side of visiting during the Winter season is that you’ll get to see the city lit up for the holidays.

If you’re lucky, you’ll also get to see Boston with a blanket of fresh white snow on the ground.

Speaking of snow, make sure your travel insurance covers cancellation or reschedule due to inclement weather.

The one downside to visiting Boston in the Winter is the possibility of a big snow storm, which could cause flight delays or cancellations, restaurant and attraction closures, and all around misery (even if you’re used to snow!).

Where to stay in Boston on a budget

If you can’t visit Boston during the Winter, don’t think you’ll have to pay an arm and a leg for your hotel room!

YOTEL Boston is located in the Seaport neighborhood, not too far from Fan Pier Park.

Seaport is the same neighborhood as the Harpoon Brewery, Lawn on D (as seen above), Taiyaki NYC ice cream, Institute of Contemporary Art (ICA) museum, and other popular attractions.

The Liberty Fleet of Tall Ships is also a hostel during the summer months!

Yep – you can stay aboard a tall ship for under $150. This fun hostel is available on Long Wharf in the North End & Waterfront neighborhood.

The only negative to staying on the Liberty Fleet of Tall Ships is that you have to leave the ship during the day due to tours.

For more tips on the best neighborhoods and hotels in Boston, check out my post about where to stay in Boston, MA.

Tips for cheap eats in Boston

If your accommodations include a kitchen, cooking some meals on your own will help save money.

There are plenty of grocery stores throughout the city, such as Trader Joe’s, Star Market, Stop & Shop, and Whole Foods.

Boston’s food trucks are a great option for sampling food from local restaurants at a lesser cost than a sit down meal.

You can find everything from sweets and fresh squeezed juice to full meals at a food truck. Check out my guide on the best food trucks in Boston for tips on which trucks to hit up while you’re visiting.

How to travel to Boston on a budget

There are a handful of ways to travel to Boston on a budget. Let’s go over them all.

The best ways to score cheap flights to Boston

There are a number of low-cost airlines that fly to Boston, such as JetBlue, Southwest, Sun Country Airlines, and Thomas Cook Airlines.

I’m a big fan of Southwest because they are almost always the easiest airline to rack up enough points to cash in for free airfare.

Be sure to check out my post on how to get a free flight on Southwest if you aren’t already aware on how to do it!

While they aren’t guaranteed to be the cheapest (flash sale, anyone?), they are consistently less costly than other airlines that fly into Boston’s Logan International Airport.

If you are staying in the suburbs of Boston, save yourself the insane parking fee and take the commuter rail into the city.

The commuter rail is an extension of the MBTA’s train line that reaches out north, south, and west of the city.

Ticket pricing depends on which zone you leave from to get to Boston, so be sure to check pricing online first.

TIP: Download the MBTA mTicket app so you can buy and store commuter rail tickets on your phone. No need to stop and print one when you get to the train station.

Downloading this app will save you a ton of time and money, as tickets purchased ON the train are more expensive.

If you’re a little further out than where the MBTA commuter rail reaches, Amtrak might be another option for traveling into the city sans car.

If you buy your Amtrak tickets a minimum of 2 weeks ahead, you can often save a good chunk of money.

Take the bus to Boston

Last but not least, consider taking a bus into Boston, such as Greyhound, MegaBus, or Peter Pan, in order to save on transportation costs.

The savings will depend on where you are traveling from, but many cities within a comfortable distance of Boston, have great deals.

Ditch the car and use the “T” instead

Do not bother with renting a car in Boston.

I repeat: DO NOT BOTHER RENTING A CAR IN BOSTON.

Parking is ridiculously expensive in Boston and you’ll find driving more of a hassle than a convenience.

Boston is a very walkable city with plenty of sidewalks and crosswalks.

Plus, the layout of the city is more intuitive to walkers than drivers.

The public transportation system in Boston, affectionately known as the T, is also a great way to visit Boston on a budget.

The T includes trains and buses, but the train is sufficient for getting to the top attractions and activities around Boston.

You can save money on your fare by buying a daily, weekly or monthly pass.

If you feel you’re better off paying each fare instead of using a pass, get a plastic Charlie Card from the customer service window, then load it with money.

Single tickets are more expensive on the paper Charlie tickets vs. the plastic Charlie cards.

Lastly, the T is free for children under 11 and active duty members of the military (with valid ID).

Yes, there are FREE museums in Boston!

During the Summer, some museums in Boston offer free admission on Fridays via to the Free Fun Fridays program with the Highland Street Foundation.

During the Summer, each Friday features a different museum or several museums with free admission.

The Free Fun Fridays program also includes a bunch of museums outside of Boston, so be sure to check it out if you’re traveling anywhere in Massachusetts over the Summer.

P.S. Yes, this offer is for everyone, not just Boston or Massachusetts residents!

If you happen to have a Boston Public Library card, you can also reserve free or discounted passes to select museums.

You can reserve 1 pass per museum within a 30 day period, but that should be more than enough for most people.

The number of passes are limited, but even if you’re traveling with a group, you’ll still save money if you’re only able to get 1 pass.

Hit up all the free things to do in Boston

There are plenty of things to do in Boston that are free AND that don’t require the hassle of reserving tickets. Most are available during all seasons, too.

NOTE: For date or season-specific events in Boston, check out my post about the classic Boston festivals and events, many of which are free to attend!

Boston also has lots of green space open to the public, all for free. The Boston Common and the Boston Public Garden are probably the most well-known.

However, my favorite is the Rose Kennedy Greenway, which curves its way from Chinatown up over to Haymarket.

I love this stretch of green space for many reasons. There are lots of funky and interesting art throughout, plus plenty of food trucks and activities like concerts and zip lining.

Another park I love is The Lawn on D in the Seaport area, next to the Aloft Hotel.

The Lawn on D has funky glow-in-the-dark circular swings that make for a fun Instagram moment.

Citizen’s Bank often hosts public events and concerts at The Lawn on D, as well.

A few blocks from the Lawn on D is Showplace Icon movie theater. It’s super fancy with reclining seats that heat up (don’t knock it ‘til you try it!) and you can drink BOOZE in the theater.

The Showplace Icon movie theater usually crazy expensive – like nearly $20 a ticket. Except on Tuesdays.

On Tuesdays, movie tickets at the Seaport Showplace Icon theater are $6 for any showing. There are also snack deals!

Last up are the free family-friendly movies each Friday in the Summer at the Hatch Shell along the banks of the Charles River Esplanade.

Save money with Boston CityPASS

Save 45% on 4 of Boston’s top attractions with a Boston CityPASS.

The Boston CityPASS provides discounted admission to the Museum of Science, the New England Aquarium (seen above), Skywalk Observatory, and a choice between a Boston Harbor Cruise or the Harvard Museum of Natural History.

If you plan to hit up these top attractions in Boston, and can’t get free passes, the Boston CityPASS is the next best way to save money on admission.

Save up to 50% on theater shows in Boston through ArtBoston’s discount ticket program, BosTix.

BosTix deals are available on the BosTix website or at 2 kiosk locations: Copley Square (at the corner of Boylston St. and Dartmouth St.) and Faneuil Hall (outside Quincy Market).

The discounted shows change regularly, so be sure to check the BosTix site for the latest deals.

Save on tickets to Boston sports games

Deals on sports tickets in Boston aren’t super easy to come by.

Boston is a HUGE sports city and the local sports teams know fans will pay full price. That said, with some patience you might come across a few deals.

If you wait until the day of to get tickets, you’re more likely to get a discount straight from the team’s box office.

If you have a specific game in mind, check out the resale market. Avoid scalpers outside the game and Craig’s List, as there’s no protection if you’re scammed.

Try official ticket brokers, like StubHub instead. Some of the bigger professional teams let fans resell their tickets through the team’s website or a partnership with a broker, too.

Members of the military, fire departments, first responders, and law enforcement can get discounts on most Boston sports tickets through GovX.

These deals are available to active, reserve, veteran and retired military members. In order to get these deals, you have to sign up for GovX in order to be verified first.

Lastly, the Boston RedSox offer student discounts through the free MLB Ballpark app. So if you’re a student, sign up for the app to get notified so you can see the Sox play at iconic Fenway Park without paying an arm and a leg.

Which tips will you use when visiting Boston on a budget?

I hope my tips will help you reign in your budget for visiting Boston. Let me know how you fared with these tips by leaving a comment below.