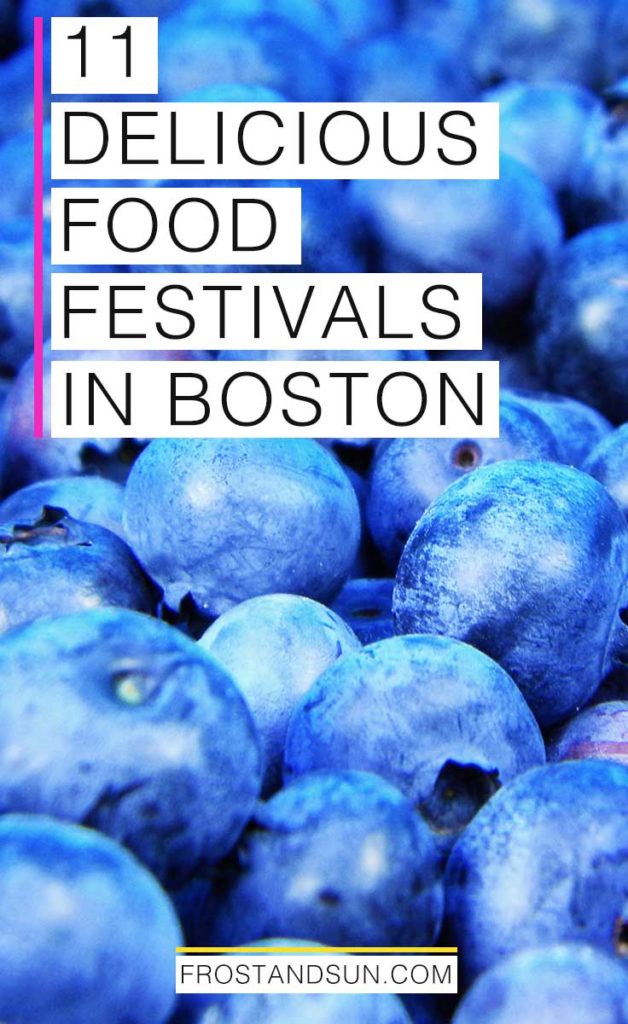 Boston is jam-packed with fabulous restaurants, so naturally it has tons of fun food festivals, too.

From local seafood and an Italian Catholic street fest to all-you-can-eat ice cream and marshmallow Fluff, here are 11 Boston food festivals worth a visit.

Dine Out Boston is a fantastic way to try out some of Boston’s best restaurants, such as Bistro du Midi, Top of the Hub Restaurant & Skywalk, and Union Oyster House.

It’s my favorite in this list of Boston food festivals, as it often leads me to try new dishes that I wouldn’t usually.

Dine Out Boston works like this: For one week, participating restaurants create a tasting menu for lunch and/or dinner.

There is also a set price tier, as chosen by the Greater Boston Convention & Visitors Bureau, that restaurants pick from for their tasting menu.

To find out which restaurants are participating in the next Dine Out Boston, check out their site.

The Boston Seafood Festival takes place in annually in August.

And of course, there’s a beer garden from Harpoon Brewery.

If you can’t make it to Boston during the Seafood Festival, check out my post on the best places to get seafood in Boston.

The Phantom Gourmet started off as a local television show that reviewed restaurants.

Now they produce several of the top food & wine events in the city!

Each summer, they host the Phantom Gourmet Food Festival, a tasting of local food and restaurants that takes place on 2 streets bordering historic Fenway Park, home of the Boston Red Sox.

If you plan to visit Boston to visit the historic North End, schedule it during the weekend of the last Sunday in August, when St. Anthony’s Feast is held.

This 3-day event is the largest Italian street festival in New England.

This is one of the most unique Boston food festivals of the bunch.

If you can’t make it to Boston when this festival takes place, check out my post about the best places to get Italian food in Boston.

The Boston Local Food Festival is a free food festival that takes place on the Rose Kennedy Greenway on a September weekend afternoon.

The best part is that it is a zero-waste event, which means they convert 100% of the energy used and divert 91% of waste (via reuse and sourcing locally, for example).

It’s a lovely way to spend a leisurely Sunday in the Arnold Arboretum.

Calling all ice cream fans: Get all-you-can-eat ice cream and frozen treats with a ticket to the Jimmy Fund Scooper Bowl.

The Scooper Bowl is the largest all-you-can-eat ice cream event in the world.

This event has raised over $5 million in the past 33 years for the Dana Farber Cancer Institute, a local cancer research organization.

In the past, the Scooper Bowl has included ice cream and frozen treats from such companies as Ciao Bella Gelato, Ben & Jerry’s, and SoCo Creamery.

The Boston JerkFest is expanding to 2 days in June 2016.

The first night will feature a rum and beer tasting event for those over 21 at the Benjamin Franklin Institute of Technology in the South End.

Day two of the Boston JerkFest is split into lunch and dinner sessions (you can buy tickets to one or both), both of which feature Caribbean and Jamaican jerk spiced food, music, and culinary demos.

WGBH is Boston’s local PBS television station. Each September, they put on the The Taste of WGBH: Food & Wine Festival, a long weekend full of panel discussions, culinary demos, music, tastings, and education opportunities (learn how to use everything in your CSA box, for example).

Taste of the North End

The Taste of the North End features food from many of the delicious authentic Italian restaurants from Boston’s North End, such as Neptune Oyster, Lucca, and Mike’s Pastry.

The event started in the early 90s as a fundraiser for a local North End charity that provided housing for families in Boston seeking medical treatment.

What the Fluff?, aka the Fluff Festival, is a celebration of the most amazing food invented in the Boston area: Marshmallow Fluff.

The 1 day celebration takes place in Union Square, Somerville, MA, a town over from Boston.

What the Fluff? features music, crafts, games, activities, and of course, plenty of treats made with Fluff.

What are your favorite Boston food festivals?

For more Boston travel tips, check out the posts in the list below: