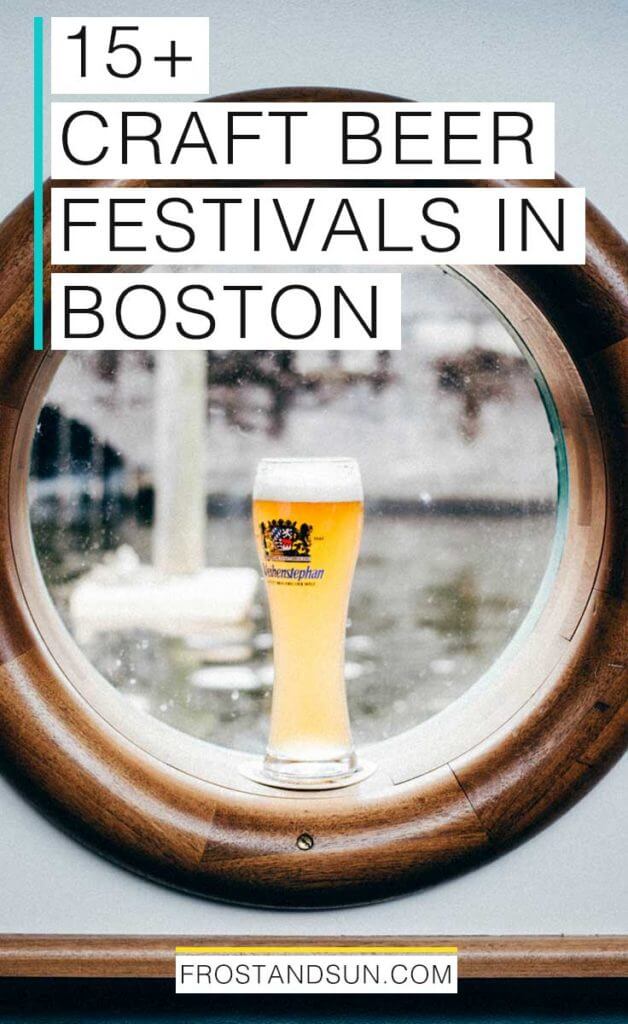 If you ask any Bostonian what the major food groups are, craft beer will probably be at the top of the list.

Check out these 15+ Boston craft beer festivals and get ready to book a trip to try some tasty brews in my home city.

The Local Craft Spirits Festival is an annual fundraiser for the Sustainable Business Network of Massachusetts (SBN).

The event features breweries from all over New England whose brews are made with local ingredients, such as cranberries and blueberries.

Aside from the local brews, there are also samples of food from local vendors, live music, and home brewing demos.

Each festival typically takes place over a Friday and Saturday night at their Boston or Vermont breweries.

Harpoonfest takes place in May to kick off the summer season.

Last but not least, Octoberfest takes place in late September/early October, with another run at their Vermont brewery on a separate weekend.

Check out the Harpoon Brewery website to learn more about other Harpoon-sponsored events or festivals at their Vermont brewery.

Samuel Adams started a new beer festival in 2015, For the Love of Beer Festival, which takes place in Boston’s Seaport neighborhood.

The festival, which is expected to be an annual event, features around 60 Samuel Adams beers on tap.

Samuel Adams also used to host an annual Octoberfest beer festival, but has since merged with the September run of the Boston Calling music festival.

Another great event is the Beer & Cider Festival, which takes place in the Fall and showcases over 90 New England beers and ciders.

If you’re looking to sample beer made in Massachusetts, the Massachusetts Brewers Fest is the beer festival for you!

The BeerAdvocate Microbrew Invitational joined the roster of Boston craft beer festivals in 2016.

As the festival’s name suggests, microbrews (small batch brews) are the star feature of the event.

Breweries featured in this event are by invite-only, hand selected by BeerAdvocate.

WGBH also puts on The Taste of WGBH Food & Wine Festival, which you can read about more in my Boston Food Festival guide.

Which Boston craft beer festival are you planning to attend?

Up next, check out more of my favorite travel tips for Boston: