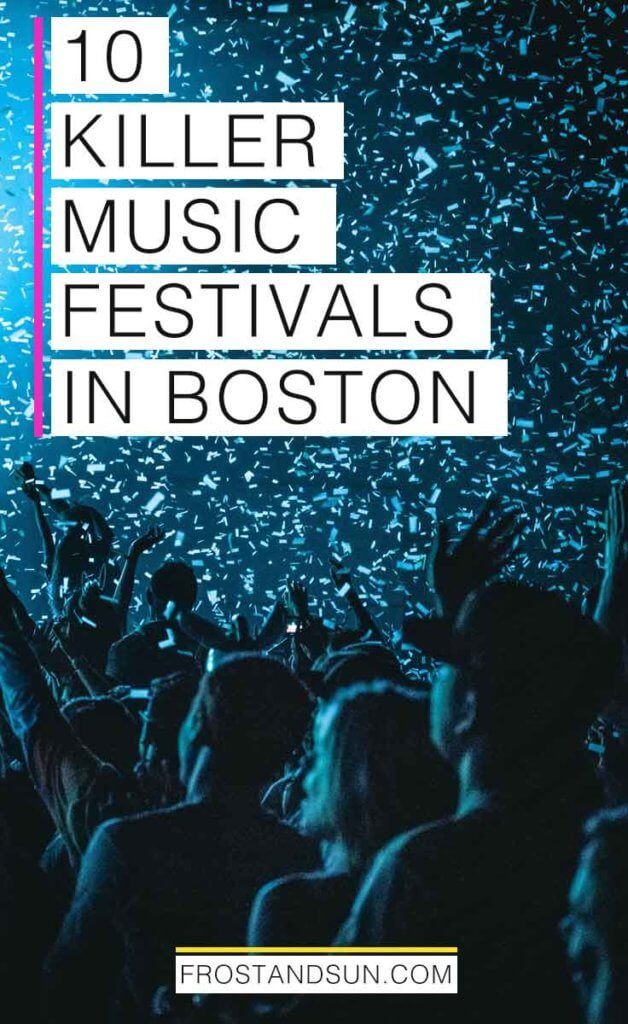 The Boston area has a rich history in music. It has produced well-known musicians, such as Aerosmith, Dropkick Murphys, New Kids on the Block, Bobby Brown, Bell Biv DeVoe, and Amanda Palmer. It is also home to the famed Berklee School of Music.

So it should be no surprise that Boston has a variety of fun music festivals and concerts.

Read on to learn more about 10 fun Boston music festivals and concert series.

I bet you’ll be booking a trip and some concert tickets by the end of the post!

Hot Stove Cool Music first kicked off in 2000 and has been going strong ever since.

The concert pops up twice a year: Boston in the Winter and Chicago in the Summer.

The concert series has raised over $8 million dollars to date for Foundation to Be Named Later (yes, that’s really the name!), which serves disadvantaged youth in Boston and Chicago.

The event is a bit unique in that the musicians are often baseball players and execs, such as Theo Epstein, Bronson Arroyo, and Len Kasper.

Local Boston and Chicago musicians often join in too, such as Bernie Williams, who is impressively a former Yankees player AND a Grammy-nominated Latin Jazz musician.

The Boston Symphony Orchestra (BSO), which includes the Boston Pops, puts on many performances throughout the year.

Perhaps the most famous BSO concert is the Boston Pops Fireworks Spectacular, which is part of Boston’s annual 4th of July Independence Day celebration.

If you’re a fan of Celtic music, be sure to check out the Boston Celtic Music Festival.

Held each January just across the Charles River in Cambridge, the Boston Celtic Music Festival features Irish, Scottish, and other Celtic music and dance performances.

The event has proved so popular that it now extends its performances to an extra week in New York City.

For more information on the next festival, check out the Boston Early Music Festival website.

Boston Jazz Week is produced by JazzBoston, the advocacy organization for the jazz community in the greater Boston area.

For information on upcoming shows, check out the Fenway Park concert schedule.

College Fest is geared toward Boston-area college students, but pretty much anyone is welcome to attend.

The music festival takes place at Fenway Park around the start of the traditional Fall semester.

Aside from a variety of musical acts, many of which are local students, college kids can pick up tons of free swag, like t-shirts and snacks to fuel late-night studying.

Together Boston combines music, art, and technology into a weeklong music festival in and around Boston.

The youngest, but arguably most popular, music festival in Boston is Boston Calling.

Past acts include Kendrick Lamar, Alabama Shakes, Pixies, Beck, The 1975, and Solange.

In more recent years, Boston Calling added comedians to the festival, and in 2019 the Boston Ballet will also perform.

The festival’s impressive lineup has earned it a spot as my favorite music festival in Boston.

Sooo technically more of a party than a concert, so I’m giving you this one as a bonus. This unique annual musical event is a must-do if you’re in Boston in June.

The event features a DJ playing Donna Summer hits, as well as other popular Disco songs. Roller skate rentals are available for free, too!

Which Boston music festivals and concert series will you attend this year?

I don’t know about you, but I think there are several music festivals in Boston that I’ll be attending this year!

Next up, check out more of my top travel tips for Boston and beyond: