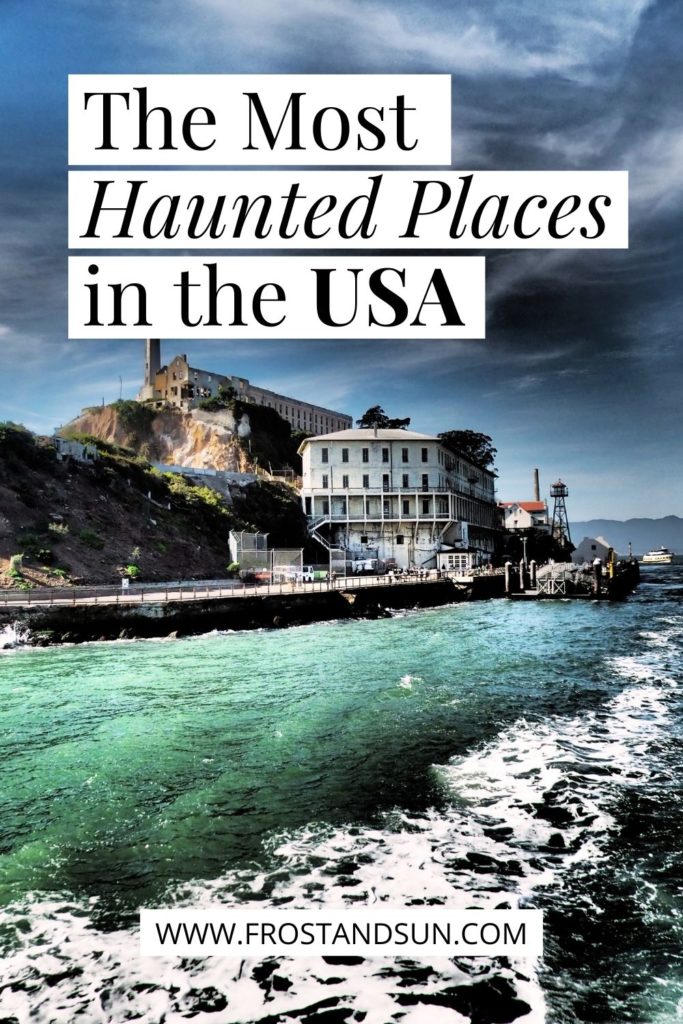 Remember when you were a kid and you loved spooky ghost stories, like the ones in Goosebumps or Scary Stories to Tell in the Dark? ME TOO!

Well guess what? You can totally turn that love of ghost stories and scary young adult novels into a travel plan!

Check out my list of the 11 most haunted places in the USA, from a quaint, but haunted, Southern town to a seriously creepy and haunted mansion in California.

The abandoned federal prison on Alcatraz Island is totes haunted

Just off the coast of San Francisco, California is Alcatraz Island, home to an abandoned federal prison that once housed dangerous criminals, such as Whitey Bulger, Al Capone, and Mickey Cohen.

Alcatraz Island was also a major part of the Red Power Movement in the early 1960s.

During this time, Native American tribes banded together to protest anti-Native policies passed by the US government to assimilate Native Americans into Urban areas (and away from reservations).

The policies were basically designed to destroy Native cultures.

A group of Native Americans from several tribes occupied Alcatraz Island for just under 2 years in an effort to reclaim the island from the US government and turn the prison facilities into various learning and resource centers.

While they were not able to achieve their overall goal, their efforts did help overturn the anti-Native assimilation policies that inspired the occupation.

Alcatraz Island is haunted by deceased prisoners and guards.

Native American legends say Alcatraz Island was home to evil spirits before the prison was built, as well.

Today you can tour the island and the eroding prison facilities, which are part of the US National Park system.

Viator has a TON of Alcatraz Tour options, some paired with other activities for a discount.

I’m partial to the Alcatraz Tour + Craft Beer Walking Tour – you’re gonna need something to take the edge off after touring this creepy abandoned prison!

Visit the most mysterious and haunted house in the US, the Winchester Mystery House

After the untimely death of her husband and child in Connecticut, Sarah Winchester fled for San Jose, California.

There she proceeded to spend 38 years building a mansion with 107 rooms on 6 acres of land.

The Winchester Mystery House is full of quirks that seemingly have no explanation, like rooms built without nails, staircases that go to ceilings, a seánce room, and items in sets of 13 (hooks, window panels, etc).

No one knows why Sarah Winchester built the home so large and odd.

But, the speculation is that she did it to please spirits that a psychic said caused her family’s death and continued to follow her.

Winchester passed in 1922, just under 25 years from when she started building the Winchester Mansion.

Today, you can tour the mansion, which is open year round, except on Christmas Day.

Stay at the Shining Hotel, aka the haunted Stanley Hotel

Visit the impressive Stanley Hotel in Estes Park, Colorado, which inspired Stephen King to write his first best-selling hardback novel, The Shining, in 1977.

NOTE: The Shining was Stephen King’s third novel, but the first hardback to make the best-sellers list.

The Shining turned into a classic horror film of the same name in 1980.

It was directed by Stanley Kubrick and starred Jack Nicholson and Shelley Duvall.

The Stanley Hotel was rumored to be haunted long before Stephen King used it as the inspiration for his novel-turned-film.

The rumors almost put the hotel out of business until King’s third novel became a bestseller.

Today, the hotel embraces its spooky vibe and offers ghost tours of its property.

If you want to learn more about this haunted hotel, check out Unearth the Voyage’s in-depth post about the Stanley Hotel, including a few tips about its ghost tours.

Explore one of the most haunted places in the USA: Savannah, Georgia

Savannah, GA, is a quaint Southern town with a spooky reputation.

The town is home to several haunted establishments, such as Moon River Brewing Company.

The Moon River Brewing Company is haunted by several ghosts and was featured on several popular paranormal TV shows, such as Ghost Hunters.

Given its spooky reputation, Savannah has several ghost tours to choose from. I recommend Genteel & Bard’s Ghost Encounter Tour.

Stay the night at the Lizzie Borden House in Fall River, Massachusetts

In the late 19th century, Abby and Andrew Borden, a wealthy couple from Fall River, MA, were brutally murdered by an axe.

Andrew’s daughter, Lizzie Borden, was the prime suspect due to odd behavior and inconsistent answers during questioning by Police.

Lizzie Borden was found not guilty in a trial nearly a year after their death.

You can tour the house where the Bordens were murdered and even book a night’s stay there.

New Orleans is one of the most haunted places in the USA!

NOLA has its fair share of haunted lore, from Voodoo priestesses to torturous murderers, vampires, and ghosts.

You can also find unofficial tours based on the Anne Rice vampire novels and American Horror Story: Coven.

For more tips on NOLA’s best tours, check out my post about the most unique tours in New Orleans.

Adding to New Orleans’ mysterious vibe are its abundance of psychic shops and long-running practice of Voodoo.

Psychics are easy to find in the French Quarter, as many will set up tables on the sidewalks throughout this neighborhood.

Voodoo is a religion with African roots, which has opened it to unfair and racist criticism over the years.

If you decide to learn more about this religion and its practices while in New Orleans, please do so with respect.

Marie Laveau’s House of Voodoo is one place where you can get a taste of what Voodoo is. They offer psychic readings, as well.

Learn about the life and death of Gothic writer, Edgar Allan Poe, in Baltimore

To this day, no one knows exactly how the writer died!

Learn more about the dark and creepy writer by visiting the Edgar Allan Poe Home & Museum, where you can see Poe’s home and writing space in Baltimore.

Afterward, head on over to the Maryland Historical Society to browse its collection of Poe-related writings, photos, and other memorabilia.

Then, hop over to the Enoch Pratt Free Library to see even more Poe artifacts.

Last up, pay your respects to Edgar Allan Poe at his grave at the Westminster Hall & Burying Ground in Baltimore, MD.

Salem, Massachusetts, is well-known for the late 17th century trials where 20 people were hung to death after being found guilty of practicing witchcraft.

For more ideas on what to do in Salem, especially in October, check out my post about Salem in October.

Philadelphia, Pennsylvania, is home to the Eastern State Penitentiary, a prison that was abandoned in the 1970s and is said to be haunted ever since.

The Eastern State Penitentiary was once “home” to several infamous prisoners, such as mobster Al Capone.

Today the former prison is a museum where you can learn about its history, its haunted roots, and see art installations.

During the Fall season, the museum hosts Terror Behind the Walls, which is probably the scariest haunted house in the USA. According to me, anyway.

The RMS Queen Mary ship in Long Beach, CA was a mail-turned-passenger ship that operated mostly between the United Kingdom and the United States between 1936-1967.

Upon its retirement in the late 1960s, the Queen Mary reestablished as a tourist destination in Long Beach, CA.

Legend has it that someone was murdered in one of the ship’s suites and continues to haunt the ship to this day. OOOoooOooOh!

The Queen Mary runs 5 tours, 4 of which are based on the ship’s spooky stories.

In addition to the spooky tours, the ship puts on the Queen Mary Dark Harbor during the Halloween season.

Dark Harbor includes several haunted mazes aboard the Queen Mary, kind of like a haunted house – but several of them!

On select dates, there is a theatrical seánce onboard the Queen Mary, as well.

You can learn more about these spooky Halloween attractions on this page.

Sleepy Hollow is a village within the town of Mount Pleasant, New York.

The village is home to the famous short story about a headless horseman, The Legend of Sleepy Hollow, by Washington Irving.

This famous short story spawned various reincarnations of spooky films, TV shows, books, and so on.

Today, the Sleepy Hollow, NY embraces its spooky roots, much like other towns mentioned in this post.

Which haunted places in the USA have you been to?

No matter what time of year you visit these haunted places in the USA, you’re guaranteed a spooky good time!

Let me know in the comments below if you’ve been to any of these places or any other haunted places around the world!

For more of my top travel tips, check out these posts: