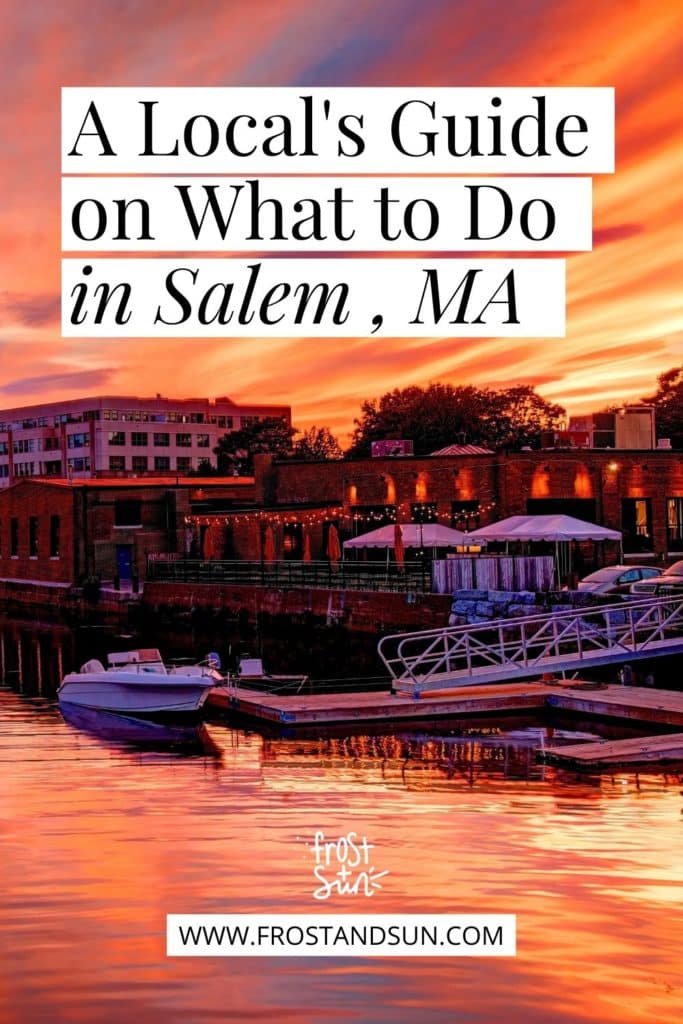 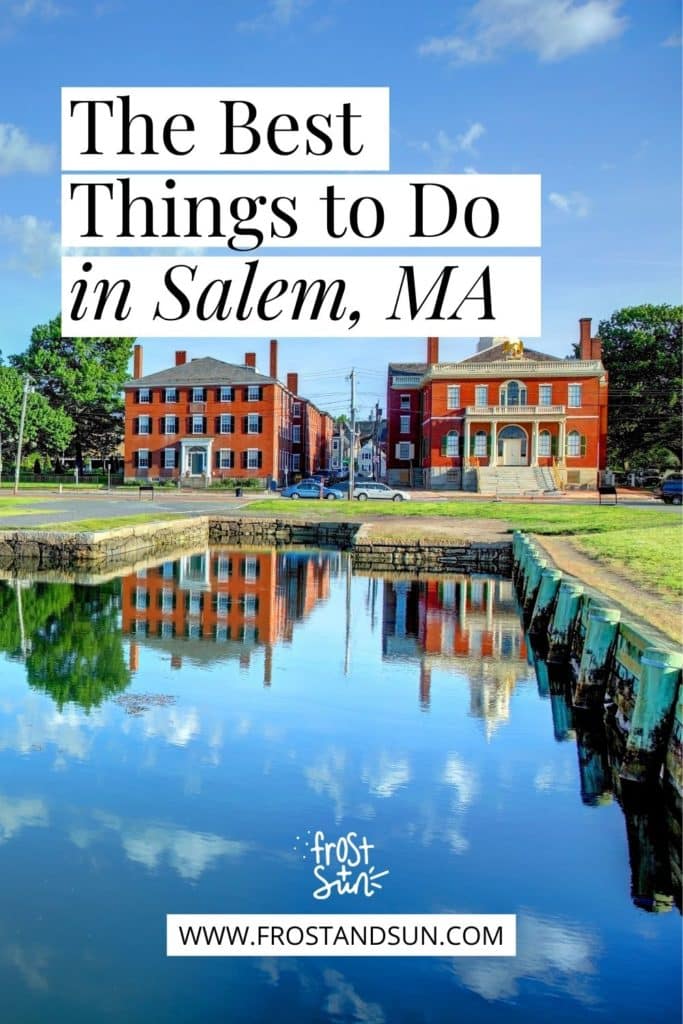 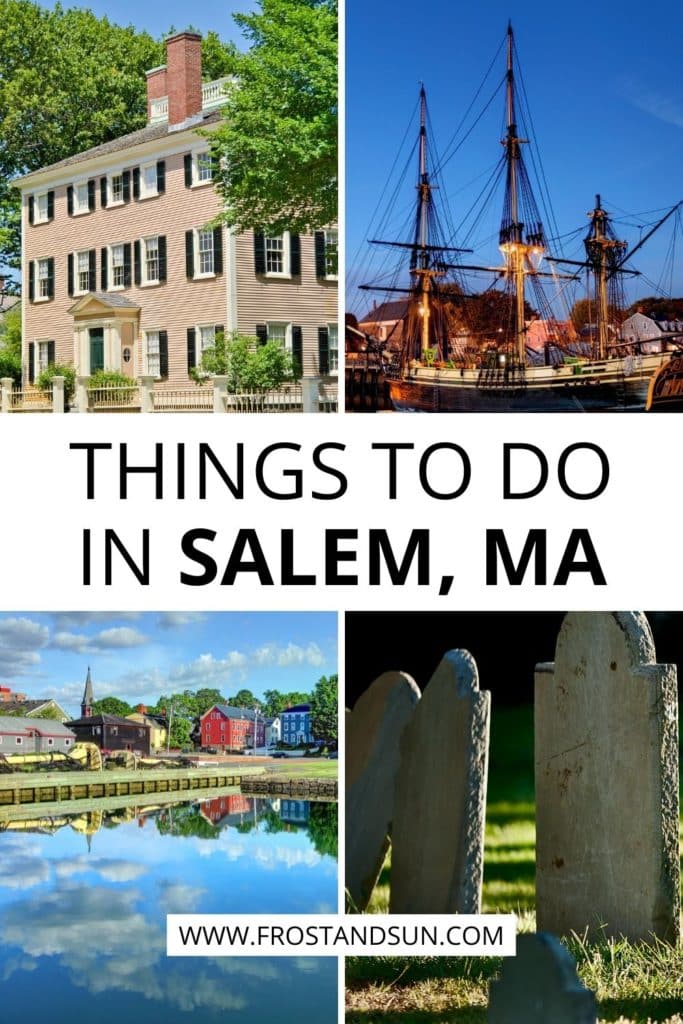 For a small New England town, there sure are a lot of things to do in Salem, MA.

Planning a trip to the Witch City can be a bit overwhelming due to this, but that’s what I’m here for.

In this post, I’ll go over the best things to do in Salem, plus a few attractions that you can skip.

One of my favorite art museums in the Boston area is the Peabody Essex Museum.

The Peabody Essex Museum not only collects and preserves art, but interprets and displays them in a way that invites visitors to explore the connection between art, culture, and history.

In addition to its art, the Peabody Essex Museum’s collection includes historic homes and a library filled with important artifacts.

While their collection includes art from a variety of cultures, my favorite exhibitions are always their fashion exhibits.

For example, through March 20, 2022, they have an exhibit that explores the Salem Witch Trials through modern fashion.

It features fashion from one of Alexander McQueen’s last collections before his death in 2010, as well as photographs from Frances F. Denny.

As tacky as some tours can be, I still love to do them.

Tours are a quick and easy way to get to know a destination that I’ve never traveled to before. I almost always find something to do that I hadn’t considered when planning my trip.

If you’ve never been to Salem, I highly recommend doing a tour, such as the Salem trolley or one of many walking tours.

Check out my post on the best tours in Salem for tips on which tours to take.

Tour the House of Seven Gables

Tour the House of the Seven Gables, the home that inspired Nathaniel Hawthorne’s novel of the same name.

The home and grounds are impeccably preserved and it’s a great place to learn about life in Salem’s early years.

The House of Seven Gables hosts a variety of events and activities, such as film screenings, lectures, and even yoga classes!

Have a spooky good time at Gallows Hill

Gallows Hill includes several attractions and tours, which can be accessed separately or via combo tickets.

First up is The Gallows Hill Main Show, a 22-minute retelling of Salem’s witchy history using 4D effects, such as rumbling seats and holograms.

In addition to the main show, they have interactive experience, Guilty! A Salem Witch Trial. In this 45-minute show, the audience is on trial for witchcraft.

Aside from the shows, Gallows Hill is also home to The Lost Museum. The Lost Museum is less of a museum and more of a haunted house/escape room type experience.

On select nights, Gallows Hill hosts a paranormal ghost hunt where guests learn about and participate in a ghost hunt throughout the museum.

Do a witchy photoshoot

A fun way to celebrate your visit to Salem is with a photoshoot at Witch Pix.

In this experience, there are a variety of scenes or backgrounds to choose from, along with coordinating costumes.

It’s like playing dress-up for grown ups, except you walk away with photos to remember it all!

Get a reading done

A visit to Salem cannot be done without a visit to a witchcraft shop or psychic!

Hex, Magicka, and Omen are 3 respectable and long running establishments in Salem that offer readings and sell artifacts for your practice or enjoyment.

TIP: If you’re intent on a reading during the month of October, I highly recommend making an appointment, as there is often a line at these establishments due to the high volume of tourists.

Visit the The Pickering House

The Pickering House is Salem’s oldest house. It was built in 1660 by John Pickering, a carpenter from Coventry, England.

It was home to the Pickering family for many generations over a span of 350 years.

As you can imagine, the house expanded over the years to meet the ever-evolving needs of each generation.

You can tour the home, along with historical artifacts from throughout the generations that lived there.

The Salem Maritime National Historic Site is the first national historic site in the United States.

It includes 12 structures, including historic homes and buildings, a replica tall ship, and a lighthouse, across 9 acres on the Salem Harbor waterfront.

Unlike some national parks and sites, the Salem Maritime National Historic Site is free to visit.

If you’re a fan of classic horror films, Count Orlok’s Nightmare Gallery will be worth your while.

The museum is filled with displays and memorabilia from horror films old and new.

Some homes in this neighborhood include the Cotting-Smith Assembly House, Pierce-Nichols House, and Ropes Mansion.

While all 3 of these homes are well-known, perhaps the most interesting to my readers is The Ropes Mansion (pictured above).

This historic home was featured in the cult-favorite Disney movie, Hocus Pocus, as Allison’s house.

Salem is home to several quaint parks and beaches that are perfect for getting fresh air, picnicking, and other outdoor fun.

Here are a few parks and beaches in Salem to consider visiting:

Artists’ Row is a small alley transformed into a plaza that features local creatives and artists.

There are several small buildings where artists-in-residence create and display their work. Some also sell their goods.

In addition, there are frequent art installations, music performances, and other entertainment.

I always make a point to stop by when in town to see what’s happening!

NOTE: Artists’ Row is a seasonal attraction. It opens in late Spring and runs through mid Fall. Be sure to check out their website below for hours and and event schedule.

A unique way to learn about the Salem Witch Trials and other parts of Salem’s history is by watching a performance from History Alive.

History Alive has several performances running at a time, so there are plenty of stories to choose from.

One of their flagship shows is Cry, Innocent: The People vs. Bridget Bishop, an immersive experience in which a young woman accused of witchcraft is set before a jury, which also happens to be you – the audience.

Shows take place across the town of Salem, so check out their website linked above for more information about tickets and show locations.

The memorial debuted in 1992 and includes 20 benches made of granite to represent the 20 women and men who were executed.

Each bench is inscribed with the name of an individual wrongfully killed during the hysteria of the Salem Witch Trials.

Visit one of the oldest cemeteries in the US

It opened in 1637 and contains the graves of several historical figures, such as Judge John Hathorne, and Governor Simon Bradstreet.

Several women, such as Mary Corey, who were wrongfully hanged during the Salem Witch Trials are also buried at The Old Burying Point.

Given its historical significance, there is a small house on site that includes a gift shop and exhibits so you can learn more about its history.

They also hosts events from time to time, so be sure to check out their website linked below.

The Old Burying Point Cemetery is located nearby the Peabody Essex Museum, behind the Salem Witch Trials Memorial.

Another spot to pay your respects to the women and men who lost their lives to the hysteria of the Salem Witch trials is Proctor’s Ledge Memorial.

Proctor’s Ledge is the actual site where the 20 women and men accused of witchcraft were hanged or executed.

It’s a very unassuming site, especially if you visit outside of the Fall season, as it simply looks like a stone garden wall.

However, once you get closer, you’ll see the names of each victim carved into the stone.

The Corwin House, aka The Witch House, is the only structure from the Salem Witch Trials that still exists today.

It was home to Judge Jonathan Corwin, one of the judges that participated in the Salem Witch Trials.

You can tour The Witch House with or without a guide, as well as participate in regular events that take place at the home.

If you’ve ever wondered what life was like during the Salem Witch Trials, you can get a glimpse at the Salem Pioneer Village.

The village is a living history museum where you can see homes from Native Americans and British settlers, as well as actors reenacting life during the Salem Witch Trials.

It was also used in the opening scenes of Disney’s popular Halloween film, Hocus Pocus.

NOTE: The Salem Pioneer Village is only open on Saturdays and Sundays.

Avoid these things to do in Salem – or not?

There are a handful of attractions that aren’t my favorite thing to do in Salem.

However, I’m going to include them here as your taste might differ from mine.

To be honest, they aren’t my favorite things to do in Salem, but if you’re a first time visitor or are traveling with kids, they might be right up your alley.

The Witch Village teaches you about history and modern day witchcraft.

Lastly, Frankenstein’s Castle is a haunted house open during the Halloween season. It’s not that spooky and will probably take you less than 5 minutes to walk through.

In my opinion, none of these attractions are worth your money considering everything else available in Salem.

The Witch Dungeon Museum includes a live reenactment of a witch trial that is based on historical transcripts from the trials.

After the reenactment, you get to tour a replica of a dungeon used to keep the accused hostage during the Salem Witch Trials.

This is another thing to do in Salem that isn’t my favorite, but I recognize that some people may enjoy it.

The Salem Witch Museum is a bit dated and cheesy, but if you don’t know anything about the Salem Witch Trials, it might be worth a visit for you.

In addition to their exhibit about the Salem Witch Trials, they also have an exhibit that explores modern day witchcraft and the evolution of public perception of witchcraft throughout time.

What are your favorite things to do in Salem, MA?

Let me know what you like to do when visiting Salem in the comments below.

New England in the Fall: A Complete Guide - Frost + Sun

[…] To learn more about visiting Salem for Halloween, check out my posts about Salem in October, best tours in Salem, MA, and best things to do in Salem, MA. […]

[…] It’s also home to the famed House of Seven Gables, which you can learn more about in my post about the best things to do in Salem. […]