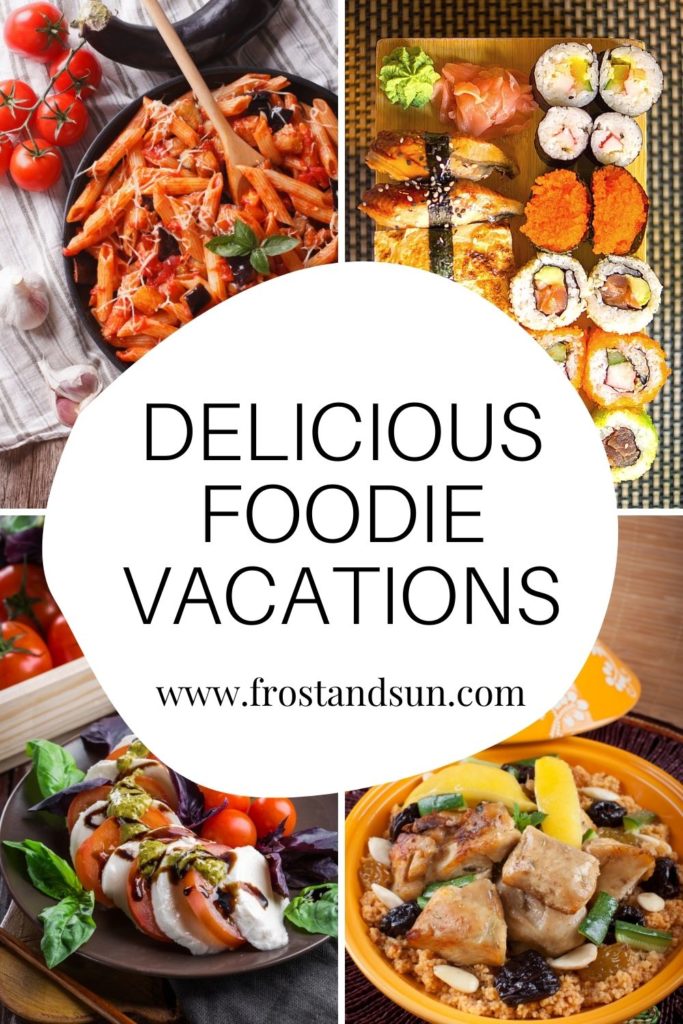 Sampling new food is one of my favorite things to do when traveling. You too?

Well, why not plan an entire vacation around eating!

Foodie vacations are all the rage these days, from dozens of food tours in popular destinations to full-on food-focused itineraries.

Keep reading for my list of the most delicious, mouthwatering foodie vacations around the world.

Moroccan food is made with an array of aromatic spices, such as cinnamon, cloves, ginger, and turmeric.

These spices are excellent anti-inflammatory helpers, making them great choices to include in the diets of those with chronic illness that causes pain or inflammation, like arthritis or endometriosis (source).

On menus, expect to find dishes like stewed lentils, couscous dishes, tagine with chicken or lamb and lots of raisins, apricots and other dried fruits.

Don’t expect to find pork, at least not easily. Most Moroccans are Muslim and therefore do not eat or prepare pork.

Last, but not least, mint green tea is the most popular drink in Morocco, so be sure to try it at least once!

Most people probably think of sushi when they think of Japanese cuisine. While seafood is prevalent, Japanese food is more than raw fish and rice.

Noodles are also a big staple, often served in broth. Ramen, soba and udon noodles are the 3 most popular noodle types.

Historically, ramen wasn’t as popular as it is these days, as it actually originated in China.

However, today there are an abundance of ramen restaurants in Japan. And just so we’re clear, I’m not talking about cheap instant noodles. Those are icky knock offs!

Drink-wise, sake and plum wine are local adult beverages that you could sample. Green tea is also a popular choice.

Aside from traditional dishes, you can also find plenty of creative, sometimes odd, food and cafés in Japan.

This fun and wacky part of Japanese culinary culture is what made me immediately think of it as a top foodie vacation destination.

There are also cafés ranging from a place to hang out with snakes (or almost any other animal) to Alice in Wonderland (and other story book tales).

Even if the food is too weird for your taste or the café only serves non-traditional dishes, the experience will at least be a long-lasting memory.

Lima itself has a wonderful mix of super fancy world-renown restaurants and delicious street food. This mix of high and low cost cuisine is what I love about Lima’s food scene.

A few dishes or ingredients to look out for are chilis, ceviche, empanadas, purple potatoes, and quinoa. Don’t forget to pop by a bar for a Pisco Sour nightcap.

And now for the rumors. Yes, people in Peru eat guinea pigs, so you’ll likely encounter it on a menu while out to eat.

Americans and people from other nations keep guinea pigs as pets. But in Peru, guinea pigs have long been a source of protein; originally in ceremonial dishes and eventually as an everyday meal.

If you’re daring enough to try guinea pig, Peru is the place to do it.

The traditional food in Barcelona is a bit different from other regions in Spain given its location on the coast.

Food in Barcelona is similar to other Mediterranean cuisine. Paella is one of the most well-known dishes with its bright yellow saffron rice and fresh seafood. It is cooked and served in large batches and meant to be shared with others.

If you want to sample the local flavors but aren’t ready to go all-in on a big meal, get tapas. Tapas are small dishes similar to appetizers in the US.

After sampling some tapas, be sure to top it all off with a glass of cava, Spain’s version of sparkling white wine similar to champagne.

Sangria, a wine concoction mixed with fruit, is also a popular beverage, though much better outside of Barcelona where the fruit is often fresh-picked.

Where do I even start with French food, especially in Paris?

From flaky, buttery croissants and rich cheeses to savory beef dishes and fabulous wine, you’ll build yourself a lovely little food baby eating your way through the restaurants in Paris.

That said, Paris is notoriously expensive, so you’ll want to plan a budget to make sure you can afford to eat everywhere on your Parisian food bucket list.

It’s not impossible to have a full-fledged foodie vacation in Paris while on a budget, but it also won’t be easy.

Food tours are one way to taste Parisian food, as are sticking to sampling French pastries and wine.

What would a list about foodie vacations be without Italy represented?

If I had to pick a single region in Italy for a foodie vacation, Northern Italy would be it.

I love a comforting bowl of risotto covered and smothered with a rich, flavorful sauce or a plate of smoky prosciutto and cheese for a snack. You too?

You’ll find plenty of dishes like this (and lots more) in Northern Italy.

If you can’t make it to Italy for Italian food, break out your stretchy pants and head to the historic city of Boston, MA.

And no, I’m not talking about Olive Garden.

Many of the restaurants in Boston’s North End are family owned and operated by Italian immigrants and the generations that have been raised in the US.

The North End is a beautiful (and delicious) example of the American dream.

One of my favorite food festivals in Boston, St. Anthony’s Feast, takes place in the North End, too.

There’s also a bustling craft beer scene in Boston, with a multitude of craft beer breweries in and outside the city, such as Samuel Adams, Harpoon, Downeast Cider House, Slumbrew and Boston Beer Works.

New Orleans is my favorite foodie vacation in the US.

Fresh, sugary beignets with a cafe au lait, savory muffaletta and po’ boy sandwiches, plenty of fresh seafood and lots of Creole, French, and even Vietnamese influences are just a few things to expect in New Orleans.

And the drinks? Well, there are plenty of bars in New Orleans to try a sazerac, hurricane or ramos gin fizz cocktail.

New York City is another excellent spot for a foodie vacation in the US, with a pleasant mix of high and low-cost eateries to drool over.

From knishes by a street vendor and rainbow bagels from a Brooklyn bakery to $500 sushi from Masa in Manhattan, New York has it all when it comes to food.

Aside from the variety available at all price ranges, much of what makes a foodie vacation to New York a must-do is its variety of cuisines.

Pick almost any location on this list and I bet you’ll find a top-notch restaurant in New York City serving food from that destination!

No, I’m not kidding. Disney World is absolutely a top destination for a food vacation!

As with many other destinations on this list, Disney World has a well-balanced mix of fancy and casual.

For example, Victoria & Albert’s at the Grand Floridian Resort earned the coveted AAA 5 Diamond rating for the 17th year in a row in 2017.

On the other spectrum are the food carts and quick service spots where you can buy popular snacks like pineapple Dole whip soft serve ice cream.

Lastly, it should be no surprise that Disney World is an expert at theme restaurants.

From Cinderella’s Royal Table, where you can dine in the classic princess’ castle to the Sci-Fi Dine-in Theatre, even if the food is just ok, you’re guaranteed to have a great time.

Where are your favorite foodie vacations around the world?

I’d love to hear all about your food tours across the globe. Let me know where you’ve traveled to for the love of all things culinary in the comments.