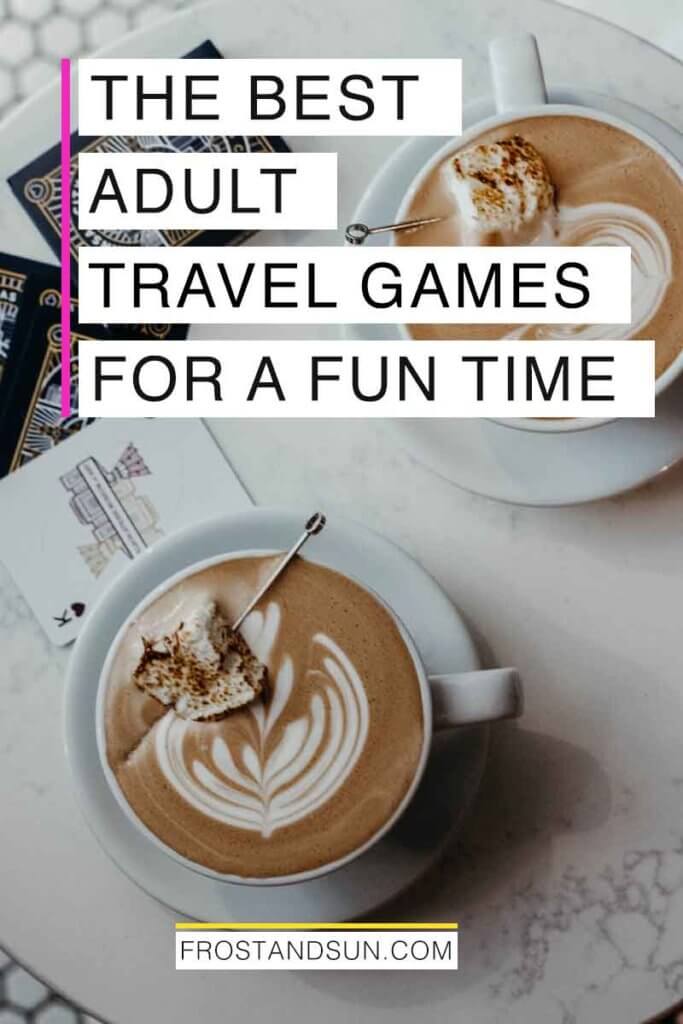 Don’t get me wrong – I love to travel, especially if it means flying. But the longer the flight is, the bigger the chance I’ll get bored.

Or if I’m camping, it’s tough to decide what to bring since you need to keep your luggage super light.

Don’t ever let yourself get bored on a plane again or go camping without some entertainment.

Check out my top 10 travel games for adults that will fit in your carry on or backpack, from playing cards to classic childhood throwbacks.

You can’t go wrong with a deck of classic playing cards when it comes to picking a travel game to bring along.

If you’re short on space but want to pack a travel game, classic playing cards are a fantastic choice due to the small size and the vast number of games you can get out of a deck.

If you’ve never heard of Cards Against Humanity, you are sorely missing out. This is one of the most hilariously fun games I’ve ever played.

Here’s a quick rundown on how the game is played.

Then, each round 1 player draws from a deck of cards that contain questions.

The remaining players have to respond to the question with one of the cards in their hand.

The goal is to have the most funny or absurd response so that the player that drew the question card selects your card as the answer.

The cards can be purchased in many ways: large packs for playing at home and smaller expansion packs that are perfect for travel.

The expansion packs are small enough to fit a few in your carry on or weekender bag!

Game of Things is so much fun, it has been featured on Ellen Tube. You know that means you’re going to get some good laughs out of this game!

Here’s how Game of Things works: One player reads a topic or question, while the remaining players write a response on a piece of paper. The player who read the topic, then guesses who wrote what.

Expansion packs can be purchased, which are perfect for travel, as the expansion packs are roughly the size of a deck of classic playing cards.

The game pads are like a notebook filled with classic games like hangman, tic tac toe, and paper fortune tellers.

If classic card games aren’t your thing, a game pad with multiple options to pick from is a great way to bring along multiple entertainment options in a small package.

I have the regular sized On-the-Go Game Pad with the orange cover seen below.

You remember Mad Libs, right? It’s that notepad game where you fill out a list of missing words like nouns and adjectives, then fill in the missing words into the short story on the next page.

If you’re looking for a fun travel game for adults, check out Mad Libs’ adult series.

The Mad Libs adult series are based on topics like bachelorette parties, cheese and wine, dating, and dysfunctional families.

Unlike the classic board game, Monopoly Deal is a quick game, making it great for flights where you might be looking for something quick to do.

The goal of the game is like the board game of the same name. To win, you must collect 3 sets of properties, such as all blue, all purple, and all red.

Phase 10 is a card game that is similar to rummy. It also reminds me of Yahtzee a bit.

The object of the game is to be the first player to complete 10 phases or sets of cards.

There are different versions of phases you can play, but the gist is that each phase is a certain combination of cards you must collect, such as 7 cards of a single color.

My friends and I used to bring this card game with us on road trips and day trips to the beach when we were teenagers. I always get a little nostalgic when I see it!

Scrabble Slam is a great way to bring the classic game of Scrabble on the road.

The game starts with a 4 letter word and the goal is to get rid of your cards by changing one letter of that word play-by-play. Trust me, it’s harder than it sounds!

The concept is simple: each card has a discussion question. There’s no winning or goal other than to use the cards to facilitate meaningful conversation.

I have the travel themed Table Topics to Go and it’s always fun to bring on group trips.

UNO is a classic card game where players are dealt 7 colored and numbered cards. The rest of the deck is placed in the middle with one card turned up.

The concept of the game is that players must discard one of their cards that matches the turned up card in the middle by color or number.

If they can’t discard a card, they must pick up a card. The goal is to get rid of your cards to win a round.

The first person to reach 500 points from all the rounds is the winner. There are more nuances to the rules, such as cards that skip the next player, but those are the basics.

It’s a lot of fun and a great way to take up big chunks of time since you have to play multiple rounds to end the game.

Pump up the classic game of UNO with a fun themed deck, such as UNO Emoji, UNO Wilderness, or UNO USA.

There are also variations of UNO, such as UNO Low Down and UNO Dare.

What are your favorite travel games for adults?

Let me know in the comments what your favorite travel games are. I’m always on the hunt for new travel entertainment to check out for my next trip!

Up next, check out more of my favorite travel tips:

[…] out my post on travel games for adults for more ideas on fun, travel-sized games that you can bring on your camping […]