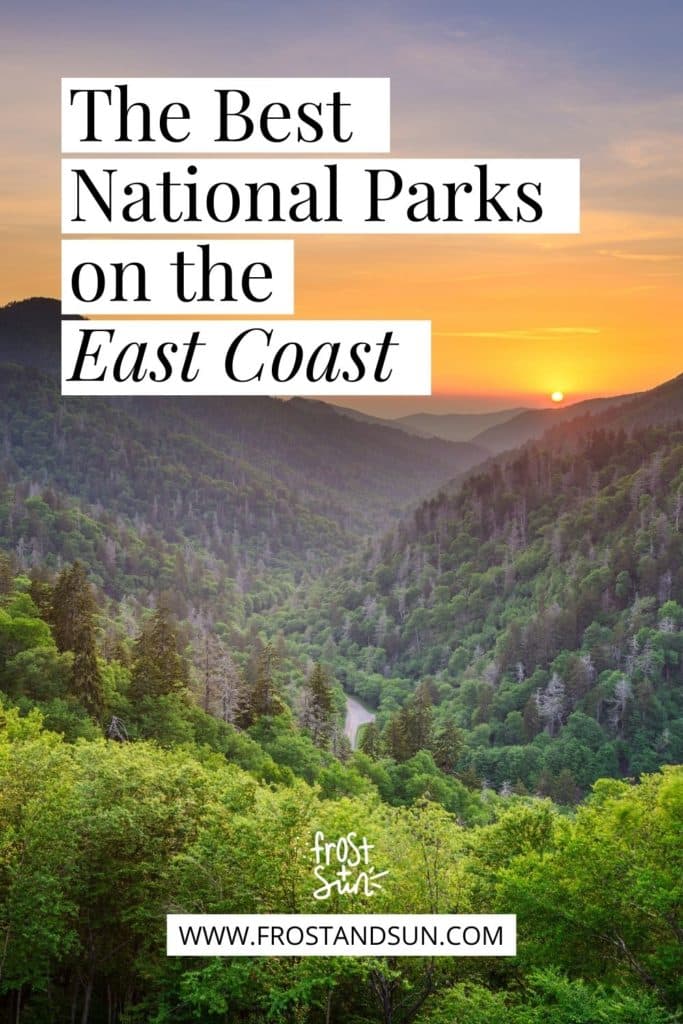 I love spending time in the great outdoors – and if you’re reading this, I bet you do too.

If you’ll be visiting the Eastern coast of the United States, I highly recommend checking out one of the beautiful US national parks nearby.

Keep reading for my list of the best national parks on the East coast, from Maine all the way down to Florida.

If we consider the literal definition, there are 5 national parks on the east coast: Acadia, Biscayne, Congaree, Dry Tortugas, and Everglades.

However, for the purpose of this post, I’m going to split the US in half and include any state surrounding the Mississippi River and over to the east.

The National Park Service manages multi-state trails, historical sites and monuments, seashores, and other important landmarks. That said, I’m only listing national parks within this list.

With the guidelines above, there are 14 national parks on the east coast.

OK, now that we have that out of the way, let’s get into this list of the best national parks on the east coast USA.

By far my favorite national park on the east coast is Acadia National Park in Maine.

This gorgeous New England park holds a special place in my heart, as it is located in the Bar Harbor, Maine area, where my grandmother grew up.

I’ve spent many family vacations at Acadia – and in fact, as I write this post, I’m preparing for yet another trip in a week.

It is made up of many beaches, rocky coastlines, miles of hiking trails, and epic views from atop Cadillac Mountain. Biking is also a very popular activity here.

Biscayne National Park in the Florida Keys is great for kayaking, fishing, boating, and other water activities. It was established on June 28, 1980.

However, the most unique thing to do at Biscayne National Park is the Maritime Heritage Trail, an underwater trail that links historical shipwrecks and lighthouses.

Yes, that’s right: underwater. Leave your hiking boots at home and pack your scuba gear instead!

Bottom line: If you love being out or in the water, Biscayne National Park is perfect for you. In fact, 95% of this park is water!

Located about 18 miles southeast of Columbia in South Carolina, Congaree National Park is filled with hiking trails, water trails for canoeing, and hike-in campsites. It was established November 10, 2003.

Congaree National Park also includes a UNESCO-designated biosphere reserve due to its unique natural resources that have developed one of the highest forests in the world.

Its long cultural history, including indigenous American life, the freedom of enslaved African Americans, and the Revolutionary war was also a major factor in the protection of this land.

Perhaps its most unique feature is that for approximately 2 weeks between May and June, it becomes home to synchronous flashing fireflies that put on a show while trying to find a mate. It’s as if you’re on the planet of Pandora!

It was established December 27, 1974 as a national recreation area and upgraded to a national park on October 11, 2000.

It is also well known for its scenic railroad, which is stunning in the Fall season.

Dry Tortugas National Park is a tiny (100 square miles) park located in the Florida Keys. It was established on January 4, 1935.

It is made up of a handful of small islands, with only 1% of the park on dry land. Thus, it can only be reached by seaplane, ferry, or private boat.

Swimming, snorkeling, boating, and fishing are all popular activities at Dry Tortugas. Coral reefs are prevalent in the area, which can be seen when partaking in water activities.

A small campground is also available on Garden Key. Unlike most campgrounds at US national parks, the campground on Garden Key at Dry Tortugas National Park does not accept reservations, except for its group sites. Therefore, it’s first come, first serve!

Lastly, Dry Tortugas National Park is home to Fort Jefferson. Fort Jefferson is a large abandoned fort built in the 19th century as a rest stop for boats and ships to refuel, protect themselves during storms, or for the US military to launch attacks if needed.

Everglades National Park is the last of 3 national parks in Florida. It was established on December 6, 1947.

Located in the southern tip of the state, the Everglades is a great spot for hiking, biking, canoeing, kayaking, bird watching, and camping.

It is made up of over 1.5 million acres of wetlands and is the third largest national park in the US.

The Everglades is arguably one of the most unique national parks on the east coast, maybe even in all of the National Park Service system!

If you’re lucky, you might catch a glimpse of an alligator, Florida panther, Loggerhead turtle, or West Indian manatee.

Lastly, like Congaree National Park, much of the land in the Everglades is a UNESCO-designated biosphere reserve.

Gateway Arch National Park is located in St. Louis, Missouri. It was established on December 21, 1935 as Jefferson National Expansion Memorial and upgraded to a national park on February 22, 2018.

The park consists of 2 main attractions, the Gateway Arch and Old Courthouse.

The Gateway Arch is an enormous arch with sweeping views of greater St. Louis. It represents a gate to the West.

The Old Courthouse is the site of the Dred Scott v. Sanford case in 1846. Dred, a Black enslaved man, sued for the freedom of himself, his wife Harriet, and their 2 children, but lost. However, they were ultimately freed a few months later.

The park grounds and a museum are free to access, but there is a fee to access the Gateway Arch, Old Courthouse, river cruise, and a film.

It is well known for hiking, camping (both hike-in and car camping), fishing, and landscapes.

Speaking of landscapes, if you’re ever in the southeastern part of the US in the Fall, head to Great Smoky Mountains National Park for prime Fall foliage viewing.

Aside from multiple campgrounds within park grounds, LeConte Lodge provides housing for hikers who reach the top of Mount LeConte.

That said, if you’re not into roughing it, check out the nearby town of Gatlinburg, TN.

Gatlinburg is packed with adorable cabins, bed & breakfasts, and hotels to rest your head.

Hot Springs National Park is a unique park in that its premiere attraction are its bathhouses, rather than its land.

In its heyday, there were 2 dozen bathhouses that utilized thermal spring water from the nearby land.

Today, 8 of the buildings stand, with only 2 of them still operating as a bathhouse: Buckstaff and Quapaw. Buckstaff is the only bathhouse to remain open since its inception.

Guests cannot bathe in the thermal springs directly, but you can visit them and touch the water.

Entrance to the park is free, but there are fees associated with services at the Buckstaff and Quapaw Bathhouses.

It was originally established as Indiana Dunes National Lakeshore on November 5, 1966 and upgraded to a national park on February 15, 2019.

Indiana Dunes National Park’s name is a bit misleading, as it is made up of more than just sand dunes.

It also includes prairies, bogs, a marsh, woods, and swamps. There’s also a pioneer homestead, a farm, a cemetery, and 3 Lustron prefabricated homes from the post-World War II era.

This slept-upon park preserves history just as much as it does nature!

It was established as a national park on July 1, 1941, nearly 20 years after local citizens started campaigning for it to be bestowed with this honor.

It was originally established as a national river on November 10, 1978, but was upgraded to a national park on December 27, 2020.

It is also the home to Bridge Day, where people go BASEjumping from the New River Gorge Bridge.

If you’re not brave enough to jump off the bridge, but still want to witness its magnificence, add the Canyon Rim Visitor Center or Long Point Trail, both of which have great views of the bridge, to your itinerary.

Last up for this list of the best national parks on the east coast is Shenandoah National Park in Virginia, which was established December 26, 1935.

This lovely park is located a little over an hour from Washington, DC, making it an excellent day trip for those visiting the capital of the US

As with other national parks, hiking, fishing, biking, and hike-in camping are all popular activities at Shenandoah National Park.

In addition to camping, rustic cabins and lodges are also available within the park.

Finally, Shenandoah National park is also well-known for its 9 waterfalls.

The east coast isn’t exactly well-known for waterfalls, so this is a rare find on the east coast!

Voyageurs National Park is in northern Minnesota near the Canadian border, and much of the park is only accessible via water. It was established on April 8, 1975.

Its most unique feature is that it is one of few places where you can see the Aurora Borealis, or Northern Lights.

Voyageurs National Park gets its name from the French-Canadian fur traders, known as voyageurs, who frequently traveled through the area in the 18th and early 19th centuries.

While the Appalachian Trail is not a US national park, it is a national trail.

The Appalachian Trail stretches along nearly every state on the actual east coast, from Springer Mountain in Georgia to Mount Katahdin in Maine.

It is the longest trail in the world, measuring a total of 2,181 miles.

What is your favorite national park on the east coast?

I hope you’ll be visiting national parks on the east coast sometime soon.

Drop a comment below to let me know which park you’ve visited!