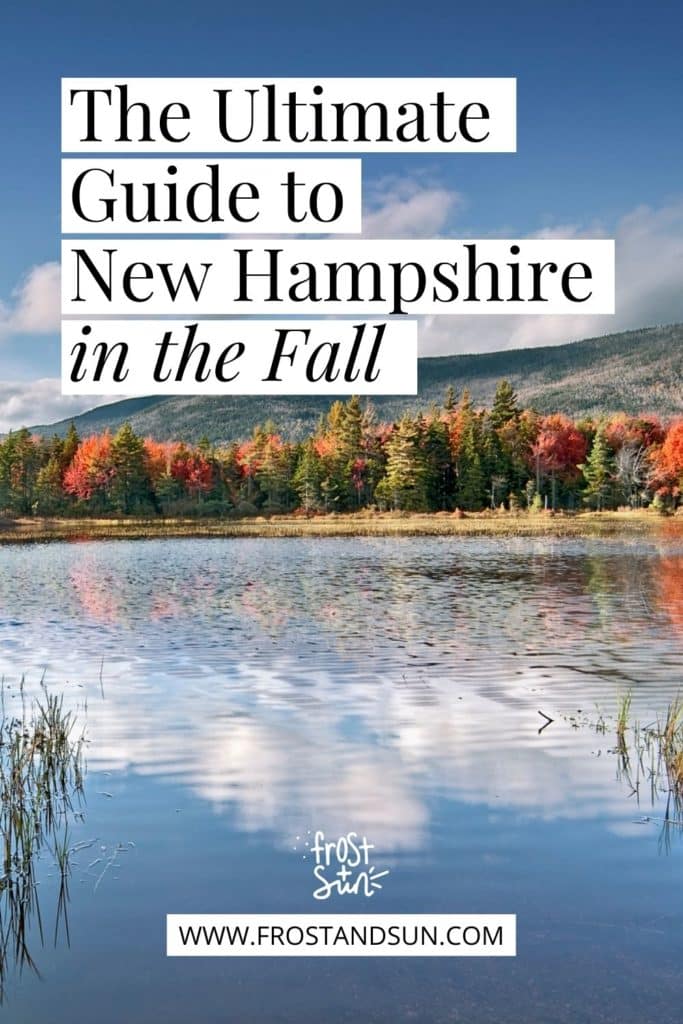 If you’re visiting New Hampshire in the Fall, you’re in for a treat.

There’s so much going on, from gorgeous Fall foliage to some of the best haunted houses in New England.

For tips on what to do in New Hampshire in the Fall, keep reading.

Here you can pick a variety of apples and shop for corn, peaches, and other goodies from their farm stand. They also offer firewood for sale.

Mack’s Apples at Moose Hill Orchard lets visitors pick their own apples and pumpkins during the Fall season.

They also have a market with other produce, like corn and tomatoes, and an ice cream stand.

In the Summer, you can pick your own peaches, too.

Sunnycrest Farm lets visitors pick their own apples in the Fall plus they have a well-stocked market.

During other seasons, you can also pick your own blueberries, cherries, and raspberries.

And while many might shrug it off, assuming that a small state film festival isn’t worth it, think again!

Many celebrity actors, film makers, producers, and others in the film industry regularly make the trek to NH to participate.

Dig in at the Hampton Beach Seafood Festival

It’s a great way to close out the Summer with one last beach weekend and lots of fun.

Get lost in the Sherman Farm corn maze

New England is full of cool corn mazes, but the one at Sherman Farm in Center Conway might be the coolest!

Every year, Sherman Farm creates an elaborate maze in their corn fields that is a pure work of art (as demonstrated below).

If that sounds a bit overwhelming, there’s a smaller, more simple maze available too.

In addition to the corn mazes, there’s a petting zoo, pumpkin patch, bounce pad, and corn boxes (aka a sandbox filled with corn!).

Last, but not least, there’s a farm market and ice cream shop on site for delicious locally grown produce and homemade treats.

The New Hampshire Highland Games and Festival is one of the biggest events put on by NHSCOT, a nonprofit organization that seeks to promote Scottish culture, particularly in the Northeast US.

Go for a hike

There are tons of gorgeous trails in New Hampshire to choose from, especially when it comes to enjoying the Fall foliage and mild weather.

But there are a few trails that standout for prime Fall foliage viewing. Here are 3 trails to consider in varying ability and lengths.

The Flume Gorge Trail in Franconia Notch State Park is perhaps one of New Hampshire’s most popular trails.

This 1-way 2 mile loop brings you past glacial boulders, covered bridges, and a waterfall. It also includes (lots of) stairs and wooden pathways.

There is an entrance fee to this trail and due to its popularity, advanced reservations are strongly encouraged.

The Flume Gorge Trail is located in Lincoln, NH.

While not a hike by definition, the 1.8 mile Lake Winnisquam Scenic Trail is set on asphalt.

This makes it accessible for those with mobility differences and still includes stunning Fall foliage views around Lake Winnisquam.

The trailhead is at the Leslie E. Roberts Beach & Recreation Area in Belmont.

Mount Major Trail in Major Mountain State Forest is a 3 mile out-and-back trail with impressive views from the top of Mount Major.

You can also pick up the Brook trail either halfway up or at the summit to turn this into a 3.7 mile loop trail.

The Fall foliage views are absolutely stunning with Lake Winnipesaukee in the foreground.

Up next: The Ultimate Guide to Boston in the Fall

A fun way to take in the Fall foliage in New Hampshire is via scenic railway.

On this 4-hour tour, you’ll take a round trip train ride from Meredith, NH with 2 stops during the tour.

The first stop is at Common Man Inn & Spa where you’ll have a Thanksgiving-inspired buffet lunch.

The second stop is at the Boston, Concord & Montreal Railroad Station in Ashland for a tour of this historic station.

Another reputable option for a fall foliage train ride in New Hampshire is via Conway Scenic Railroad’s Mountaineer tour that takes off from North Conway.

The Mountaineer is a 5-5.5 hour train ride that takes you through Crawford Notch.

The ride includes views of mountains, streams, bridges, and of course, plenty of Fall foliage if you visit during peak foliage season.

It also includes a stop at the historic Crawford Depot in Caroll, NH.

One of the biggest pumpkin festivals in the United States happens right in New Hampshire!

The festival originally started in Keene, NH, but moved to Laconia in 2015.

The goal of the festival is to beat the world record for the most lit carved pumpkins.

As you can imagine, it is a sight to behold with masses and masses of jack-o-lanterns, all lit up at night!

The current record is held by the 2013 festival, which gathered 30,581 lit jack-o-lanterns.

In 2022, the New Hampshire Pumpkin Festival takes place from October 15-16.

Test your bravery at a haunted house

There are many haunted houses, hayrides, and other spooky attractions in New Hampshire, but these 3 take the cake.

If you’re into spooky things year-round, not just in the Fall, then Fright Kingdom is for you.

In addition to the spooky attractions, there’s Monster Midway, a classic fair midway with an escape room (for additional cost), photo ops, food, drink, and other fun stuff.

Fright Kingdom is open Friday, Saturday, and Sunday in October.

Located at DeMeritt Hill Farm in Lee, Haunted Overload is truly one of the scariest Halloween attractions in the US, much less New Hampshire.

This haunted trail offers multiple options to satisfy any customer, from lights on with no scares to pitch black and all stops pulled out.

One of the largest – and spookiest – Halloween destinations in New Hampshire is in Litchfield, NH.

In addition to the spooky attractions, there’s a beer garden, food, arcade games, go-karts, and other rides.

What will you do in New Hampshire in the Fall?

I hope your visit to New Hampshire in the Fall is full of fun in the great outdoors and all things spooky!

For more fun things to do in the Fall, check out my posts about Fall in New England and Fall in the USA.

[…] New Hampshire in the Fall: Everything You Must Know […]

Fall in the USA: Best Places to Visit - Frost + Sun