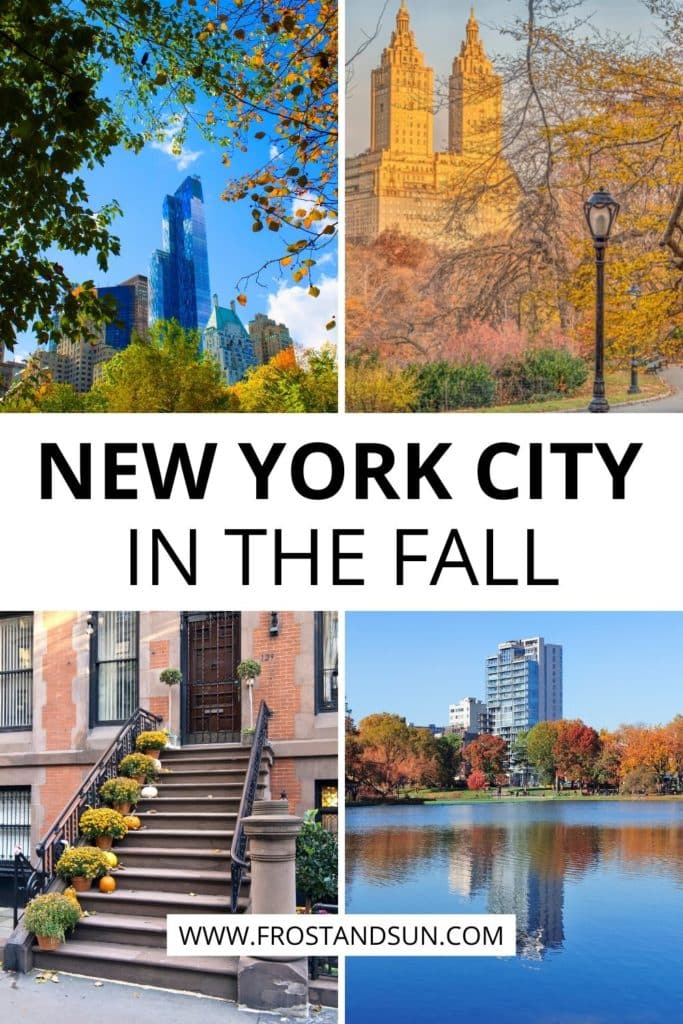 Fall in New York City is perfect for a city getaway and lots of Autumn fun.

In this post, I’ll show you my favorite activities and events in NYC in the Fall, from parades and parties to parks and more.

While NYC may be known as the concrete jungle, it is not devoid of the gorgeous Fall colors you’ll see in the Northeastern part of the US, especially upstate New York or the New England region.

Head to the famous Central Park to see the Fall colors around October through early November.

This 843-acre park in the heart of Manhattan has over 700 types of plants and trees that you can admire any time of year, but especially in the Fall.

Enjoy the foliage on a picnic, leisurely stroll, bike ride, or carousel ride.

TIP: Two of my favorite spots to get an aerial view of the city are Rockefeller Center’s Top of the Rock observation deck and the High Line park.

Stuff your face at the Feast of San Gennaro

San Gennaro was an Italian Bishop who is now known as the patron saint of Little Italy NYC.

Little Italy honors him each year with a week-long celebration filled with concerts, vendors, a parade, and eating competitions (cannolis, meatballs, and zeppole).

Geek out at NY Comic Con

Calling all geeks – New York is home to one of many major comic cons in the US!

Perhaps my favorite part is the many attendees who show up in cosplay that is just as good, if not better, than what you see in books or on screen.

In 2022, New York Comic Con will take place October 6-9 at the Javits Center.

If you ever find yourself in Greenwich Village on Halloween, you’ll probably witness New York City’s only nighttime parade.

Held every year since 1973, the Village Halloween Parade features marching bands, themed puppets, and other entertainment.

Every year there’s a different theme for the participants and spectators to inspire creativity, although it is not required to match the theme in order to participate in the parade.

In 2022, the theme is “It’s Playtime,” with a focus on games and audience interaction and engagement. Oh – this is sure to be good!

Get spooked at the Brooklyn Horror Film Festival

Get into the Halloween spirit with a spooky film or 2 at the Brooklyn Horror Film Festival.

Started in 2016, the Brooklyn Horror Film Festival is, as you probably guessed, dedicated to films of the horror genre.

It specializes, however, in films that push the boundaries of what most think of as horror.

The Brooklyn Horror Film Festival takes place across a week with most events on the weekends.

Events take place at a variety of venues across Brooklyn, so be sure to visit the Brooklyn Horror Fest site for more information.

Another perfect spot to see Fall foliage without leaving city limits is the New York Botanical Garden in the Bronx.

This 256-acre botanical garden has over 1 million plants and trees, many of which explode with gorgeous Fall colors.

If you plan to visit the New York Botanical Garden in the Fall, I recommend visiting the wetland trail, forest, seasonal walk, perennial garden, azalea garden, and the children’s adventure garden.

In the Fall, the New York Botanical Garden is open Tuesday through Sunday from 10 AM to 6 PM, as well as on Mondays that are federal holidays.

If you’re in the city on Thanksgiving Day, join in on the fun with Macy’s Thanksgiving parade, the largest parade in the world.

If you can’t make it to see the parade in person, NBC airs it on its local affiliate channels across the US.

Scream your voice away at Blood Manor

If you thought you’d have to leave the city to get a good haunted house experience, you’re mistaken!

Blood Manor is a long-running haunted house right in Manhattan that’s regularly rated one of the best spooky experiences in the US.

It’s even been featured on The Tonight Show with Jimmy Fallon!

While you could head to a farmer’s market for some fresh, native apples, why not make a day trip of it?

Long Island and the Hudson Valley in New York have plenty of cute farms and orchards that offer apple picking, along with other in-season produce and goodies.

Check out my post about New York state in the Fall for tips on where to go apple picking in NY state.

Hang out at Green-Wood Cemetery

The Green-Wood Cemetery in Brooklyn is unlike any cemetery I’ve ever heard of.

This 478 acre wonder celebrates life with a series of art programs, such as concerts, art installations, and an annual gala.

In one art installation, which has been at the cemetery for 25 years, visitors are invited to write their secrets and drop it into a grave created by artist Sophie Calle.

The grave is transcribed with the saying “Here Lie the Secrets of the Visitors of Green-Wood Cemetery.” It’s like a real-world version of Post Secret!

Green-Wood is open to the public 7 days a week. Check out their website linked below for a complete list of programs and hours, as they change periodically.

Take a stroll along the East River

The East River is the body of water between Manhattan and Brooklyn. It’s adorned with wide walkways at multiple points on both sides.

The location makes it a great spot for views of either part of the Big Apple, especially the Brooklyn Bridge, which crosses the East River.

I love going for long, contemplative walks, but love it the most in the Fall season.

There’s nothing better than grabbing a warm cup of tea or coffee and leisurely strolling alongside a river or lake, with Autumn leaves crunching under your feet.

Learn about the spooky side of NYC on a ghost tour

See the city of New York through a haunted lens on a ghost tour.

There are 2 reputable tour companies that offer several different ghost tours in NYC: Boroughs of the Dead and Haunted Manhattan.

Boroughs of the Dead offers 4 tours:

Island of Lost Souls is perhaps the most unique of the tours, as there aren’t many tours featuring Roosevelt Island, which was once home to an asylum, smallpox hospital, and a penitentiary.

New York City has several Harry Potter inspired attractions that will bring out your inner witch or wizard.

First up is Harry Potter and the Cursed Child, a Broadway play that picks up in the world of Potter and friends 19 years after the books end.

Harry is the head of the Department of Magical Law Enforcement at the Ministry of Magic and his son is about to enter Hogwarts.

You’ll have to see the play to learn what happens!

The store operates on a timed-entry system at the moment.

Here’s how it works: stop by the store as early as 7 AM to scan a QR code and get your entry time.

Return to the store within an hour of your assigned entry time.

There are a limited number of slots available and you can’t make reservations online or by phone, so if you have your heart set on going, get there early to scan the code!

Last up is The Cauldron NYC, a potion-themed bar that features a potion making class for an extra cost.

While the Cauldron is a bar, they host family-friendly non-alcoholic potion making classes so the kiddos can get in on the potion making fun.

What will you do this Fall in New York City?

Let me know what you get up to this Fall in New York City in the comments below.

If you’re looking for Fall activities outside of New York, check out my post about Fall in the USA.

Fall in the USA: Best Places to Visit - Frost + Sun

[…] For tips on planning a trip to the city that never sleeps, check out my post about NYC in the Fall. […]