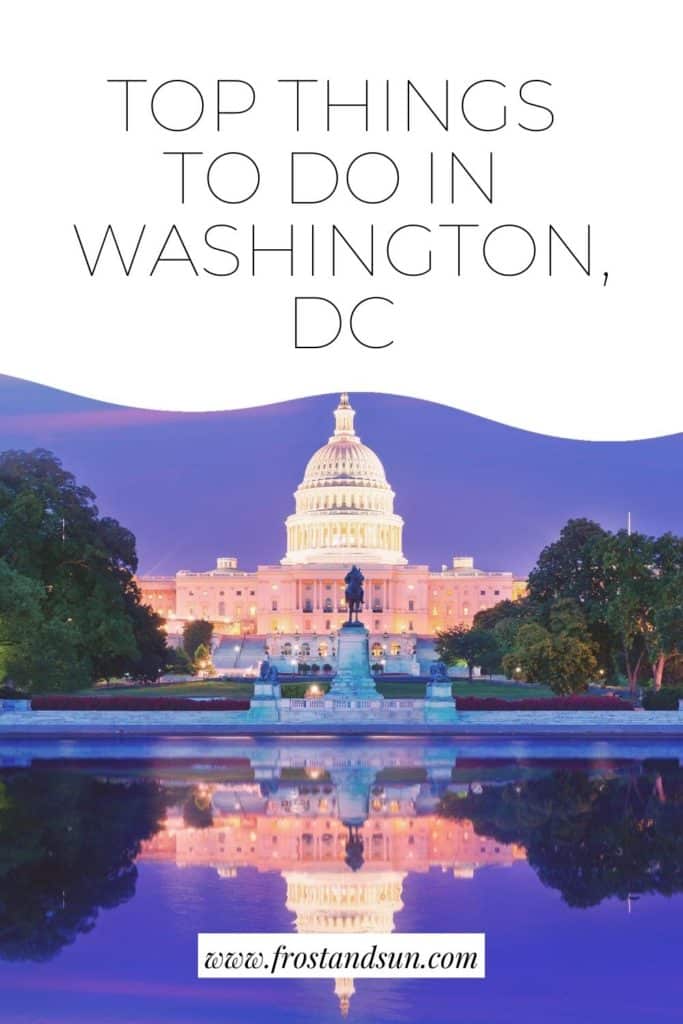 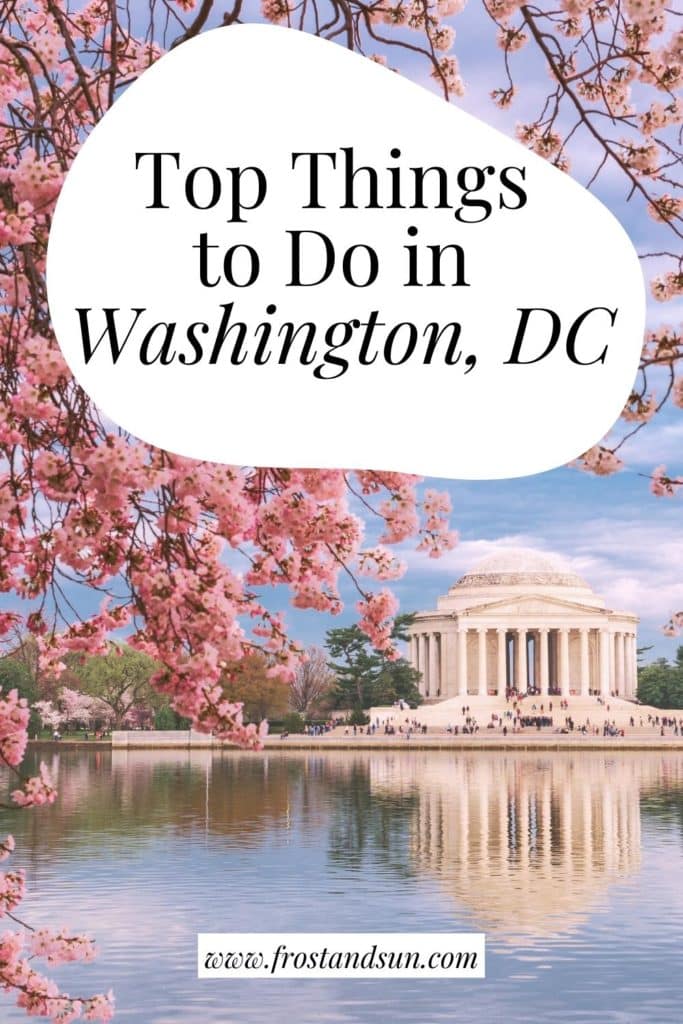 Looking for things to do in Washington, DC? Well, you’re in the right place.

From museums and politics to the performing arts and sports, DC has a little for everyone.

Keep reading for my top things to do in Washington, DC.

Spend a day at a museum in Washington, DC

Visiting a museum is at the top of the list of things to do in Washington, DC.

DC has a seemingly endless roster of museums to pick from. Chances are good that you’ll find a museum that fits your interests.

My top 3 favorite are the International Spy Museum, National Museum of African American History and Culture and the United States Holocaust Memorial Museum.

The International Spy Museum teaches visitors about espionage and intelligence around the world and how both impacted history, as well as current events.

And the museum isn’t just dedicated to real-life events; it also features a look into some of our favorite fictional spies, such as the one and only, James Bond.

One of the newest of the Smithsonian museums, the National Museum of African American History and Culture houses over 36,000 artifacts.

The artifacts are displayed in exhibitions that explore the history, community, and culture of Black America.

Admission is free, but you need a timed-entry ticket to visit.

The United States Holocaust Memorial Museum educates visitors about the Holocaust and honors the lives of those persecuted and murdered during this time.

But don’t let the museum’s name mislead you. It also aims to educate visitors about genocide across the world, with exhibits covering such events as the Cambodian genocide in the 1970s and current threats around the world, such as that in Syria.

The United States Holocaust Memorial Museum also hosts events, such as talks with survivors of the Holocaust.

If you’re in DC for the first time, stopping by the White House is a must, at least for a selfie or group photo.

If you plan ahead, you can see the inside, too.

Requests for tours can be made up to six months ahead, but no later than 21 days before the trip, is desired.

Wander the Library of Congress

The Library of Congress is the largest library in the world, based on the number of items it has catalogued (160 million and counting).

That said, tours aren’t required to visit, so you could always pop in to admire the interior, browse the collections, or attend an event.

My favorite outdoor activity within DC city limits is people watching on the National Mall and strolling around the Tidal Basin (or renting a paddle boat!).

Another great outdoor spot is Theodore Roosevelt Island, a US National Park.

The island was once neglected land and later transformed into a forest to honor President Theodore Roosevelt who was a notable conservationist.

The island features several hiking trails and a plaza with a statue and fountain in memory of Roosevelt.

The United States National Arboretum is a beautifully curated collection of botanicals, including a bonsai tree that survived an atomic bomb in Japan during World War II.

If flowers and plants are more your thing, check out the United States Botanic Garden or Kenilworth Park & Aquatic Gardens.

If you’re visiting Washington, DC during the Spring or Summer, make your way over to Nationals Park to take in America’s pastime, baseball.

The Washington Nationals typically start their season in April and play through early October.

Pay your respects at the many monuments and memorials

Aside from museum hopping, visiting the monuments and memorials is another one of my favorite ideas on what to do in Washington, DC.

DC has beautiful memorials throughout the city that honor those who have served in the US military.

The Vietnam Veterans Memorial is one of my favorite memorials of any kind in any city. Its design is sleek and shiny, contrasting against the many other memorials in the area.

The World War II Memorial also holds a special place in my heart, as my grandfather and his brothers served during this war. The memorial is massive, with a pillar for each state.

There are other lovely memorials throughout the National Mall and surrounding area, as well as a few across the river in Arlington, VA, such as the National 9/11 Pentagon Memorial and Arlington National Cemetery (where you can see the Tomb of the Unknown Soldier).

Don’t forget the classic memorials, too! To see these, head to the National Mall.

Spend a night at the theater

It is also the “home venue” to the National Symphony Orchestra, Washington National Opera, and the Suzanne Farrell Ballet.

Shakespeare enthusiasts will surely enjoy the Shakespeare Theatre Company at the Harman Center for the Arts. The Washington Ballet also performs in this venue.

Ford’s Theatre puts on classic productions, including an annual run of A Christmas Carol. Ford’s Theatre is where US President Abraham Lincoln was shot and killed.

It features a museum dedicated to Lincoln and hosts talks and productions about his assassination.

If you have an extra day, I recommend taking a day trip from Washington, DC.

A few ideas include:

What are your favorite things to do in Washington, DC?

I hope you found plenty of things to do in DC to fill up your travel itinerary.

For more DC travel tips, check out the posts below: